Get 15% off Awareness Jewelry. No Code Needed. Hurry!

The Autism Society of North Carolina is the leading resource in North Carolina for connecting people who live with autism, and those who care about them, with resources, support, advocacy, and information tailored to meet their unique needs. ASNC strives to create communities throughout the state in which people on the autism spectrum and their families are empowered, supported, and fully embraced by their communities. The Breast Cancer Research Foundation is a nonprofit organization committed to achieving prevention and a cure for breast cancer. We provide critical funding for cancer research worldwide to fuel advances in tumor biology, genetics, prevention, treatment, metastasis and survivorship. BCRF is the highest rated breast cancer organization in the U.S. with an A+ rating from Charity Watch and 4 out of 4 stars from Charity Navigator. CPO, a Catholic Charities of the Diocese of Raleigh program, is celebrating 40 years of serving the triangle community! We provide emergency food assistance and, when possible, small children's clothing and baby items, such as formula and diapers. As conflict in Ukraine escalates, UNICEF is scaling up its emergency response inside the country — while also racing to meet the urgent needs of vulnerable children and families on the move as they stream into Poland, Romania, Moldova and other neighboring countries.

UNICEF is scaling up its emergency response in Ukraine as escalating conflict continues to pose an immediate and growing threat to the lives and well-being of the country’s 7.5 million children. 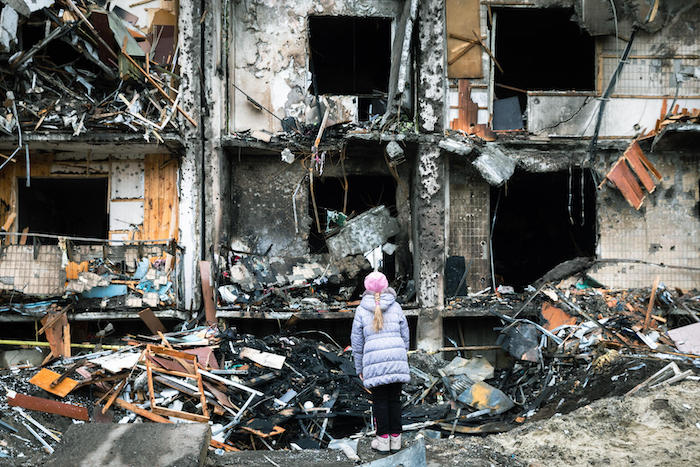 On Feb. 25, 2022, in Kyiv, Ukraine, a girl looks at the crater left by an explosion in front of an apartment building which was heavily damaged during escalating conflict. © UNICEF/UN0597997/Skyba for The Globe and Mail

UNICEF reported Monday that fighting had moved closer to the civilian population — and well beyond the eastern region, where conflict has raged since 2014, now escalating to a nationwide emergency. Hundreds of homes have already been damaged or destroyed and damage to civilian infrastructure has left hundreds of thousands of people without safe water or electricity.

While working around the clock to scale-up humanitarian relief efforts in the hardest-hit areas inside Ukraine, UNICEF teams are also working alongside UNHCR and other partners to mobilize support for children and families who have fled the country to escape the violence. 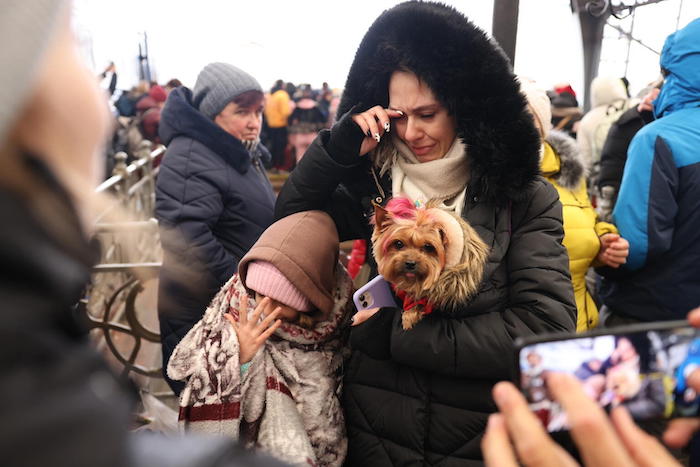 A family waits to board an evacuation train at the railway station in Lviv, the largest city in western Ukraine, near the Polish border. © UNICEF/UN0598136/Moskaliuk

As of Feb. 28, an estimated 500,000 people had crossed into Poland, Romania, Moldova and other neighboring countries. Most are women and children, and their numbers were expected to double by the end of the week.

“It was a decision [to leave] taken in just a few moments, because the situation in Ukraine is very hard and you don’t know what will be in the next minute — nobody feels safe now in Ukraine," said Sophia, 19, who fled her home in Chernivtsi with her sister, Tania, and her niece, Tania's daughter, Mia, 2. The trio crossed into Romania at Siret on Feb. 27. They are planning to go to Spain, where an uncle lives, until it is safe to return to their home. 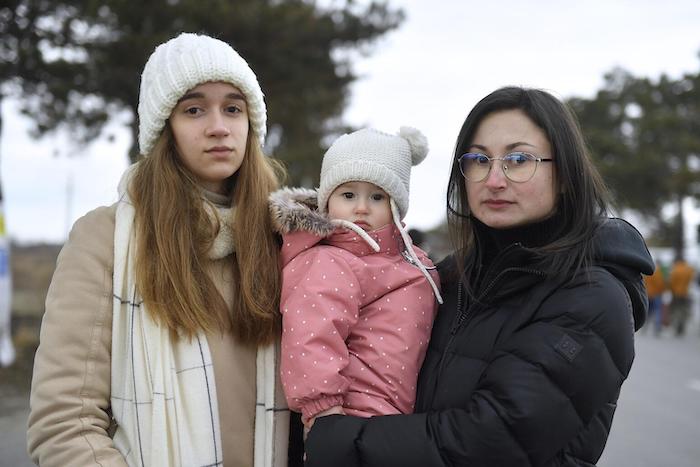 Sophia, 19, left, fled Ukraine on Feb. 27 with her sister Tania and her niece, Tania's 2-year-old daughter Mia, crossing into Romania at Siret. © UNICEF/UN0598454/Nicodim

UNICEF's response outside of Ukraine includes setting up 'Blue Dot' centers at border entry points and other strategic locations to support the delivery of emergency services to vulnerable families. Blue Dots, a concept that originated during the refugee crisis of 2015-2016, are organized in close coordination with national and local authorities, and in collaboration with UNHCR and other protection partners. 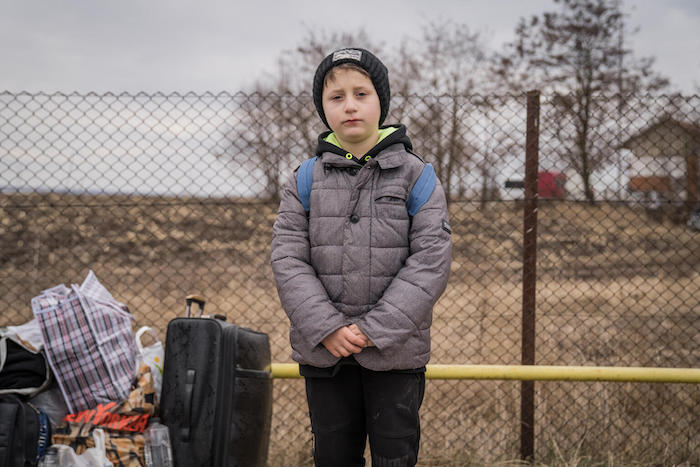 David, 7, from Chernivtsi, Ukraine, crossed into Romania on Feb. 27, 2022, accompanied by his grandmother, who then returned home to her husband. David will continue his journey to the Czech Republic, where his parents are living. © UNICEF/UN0598532/Moldovan

From these Blue Dot hubs, UNICEF can provide information to traveling families, psychosocial support and referrals to social workers and health services. They also facilitate family tracing and reunification efforts for children who have become separated from their family during their journey.

UNICEF plans to set up 26 Blue Dots — each with the capacity to support 3,000 to 5,000 people per day, per location — in Moldova, Romania, Belarus, Slovakia, Poland, Hungary and Czech Republic. UNICEF is working with governments and partners on quick assessments and is expecting the first Blue Dots to be operational within two to three days.

Families with small children fleeing escalating conflict in Ukraine waiting to cross into Romania at the Porubne-Siret border on Feb. 26, 2022. © UNICEF/UN0597921/Radwanski/AFP

The first Blue Dot hubs of this kind were launched in February 2016 in Europe as part of a coordinated response after more than one million people fleeing conflict or instability in countries like Syria, Afghanistan and Iraq crossed the Mediterranean Sea into Europe in 2015.

Meanwhile, UNICEF Country Offices are scaling up their health programs in countries bordering Ukraine to strengthen essential health services — including routine immunizations that many children have missed out on due to disruptions in services back home. 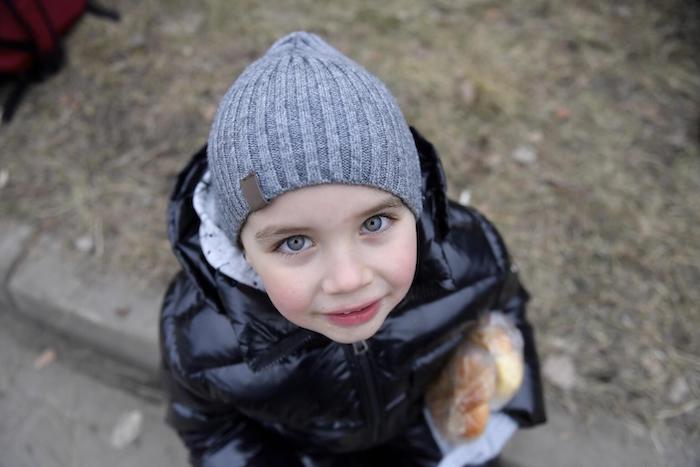 Max, 4, fled to Romania with his mother, Aliona, on Feb. 27, 2022. The family left Kyiv for Chernivtsi, which is close to the border, a few days before. "My parents live outside Kyiv and they woke up to the sound of explosions near their house. We were able to leave in 15 minutes." Aliona says she planned to make her way to France to stay with a friend. Her husband remained in Ukraine. © UNICEF/UN0598495/Nicodim

Providing safe water, sanitation and hygiene supplies is another UNICEF priority. On Feb. 26, UNICEF delivered four tons of basic hygiene products, including diapers, disinfectants and absorbent wipes to the Palanca center in Moldova near the border with Ukraine. 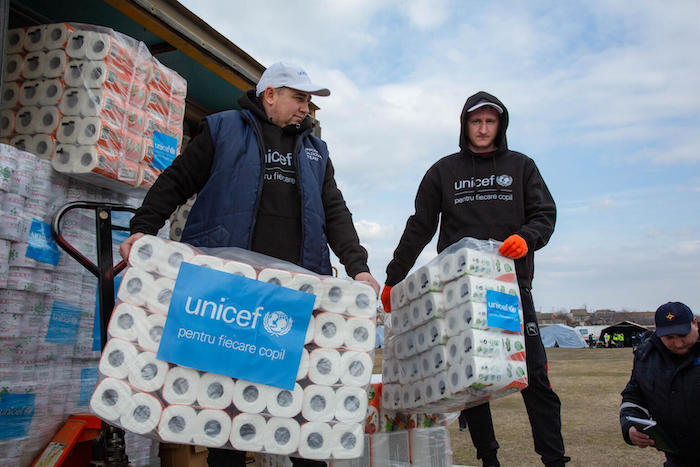 On Feb. 26, 2022, UNICEF delivered four tons of basic hygiene products to Moldova as tens of thousands of families crossed into the country from Ukraine to escape the escalating conflict. © UNICEF/UN0598145/Velixar

UNICEF has issued an emergency appeal to help fund its relief operations in Ukraine and neighboring countries. Help UNICEF save and protect the most vulnerable. Donate today.

Check out all of our unique and stylish products.  On all orders, you pick a charity, The House of Awareness, gives 10% of the product cost to that charity.  10% does not include taxes and shipping.

Signup for our newsletter to stay up to date on sales and events.